Posted by SneakyElephant at 09:05 No comments: http://www.youtube.com/watch?v=DOHBIUvcWT8
I really don't know if this film belongs here, but it's here now! The plot is weird like all 60s/70s British movies so bear with me...
Chas (James Fox) is a bully boy for a London crime syndicate. He works the protection rackets and duffs up the ones that resist. He goes too far however, and has to go on the run, disguising himself as a juggler (!) and attempting to lose himself in the Bohemian quarter of Notting Hill. He blags his way into a house inhabited by Turner (Mick Jagger) and rents a room. Turner, however, is rather strange himself, being a rock star in hiding who is 'searching for his lost demon'. Along with Pherber (Anita Pallenberg) and Lucy (Michele Breton) he attempts to exorcise the demon within Chas...what a strange story! Also stars Anthony Valentine and 'hard man' John Bindon.
More weird wonders from Sneaky Elephant SOON!
Posted by SneakyElephant at 02:57 No comments:

THE LUNATICS ARE TAKING OVER THE ASYLUM! Also known as Twinkle, Twinkle, Killer Kane, this  is a mad film about madness and  madmen. The original story was written by William Peter Blatty, who was also responsible for THE EXORCIST , and he also produced and directed this amazing piece of cinema. It concerns a bunch of mentally damaged American military personnel, now being kept in a castle somewhere in America. Into this environment steps US Marine Colonel Hudson Kane (Stacy Keach), the new psychiatrist in charge. However, Kane seems to have a few problems of his own in the upstairs department, including recurring dreams of death. He befriends astronaut Billy Cutshaw (Scott Wilson) and the pair make a pact concerning personal sacrifice and the nature of life after death. Kane's true identity is eventually revealed, and Cutshaw discovers a truth of his own by the climax.
The story has some crazy humour and more twists than a worm in a salt bath. It is also memorable for the INCREDIBLE bar fight, in which Kane takes on an entire chapter of bikers barehanded.But why is he called KILLER KANE I hear you ask? Watch it and find out! A GEM!
More memorable madness from Sneaky Elephant SOON!
Posted by SneakyElephant at 16:26 No comments:

IF YOU'RE LYING, I'LL BE BACK! Robert Ginty is John Eastland aka THE EXTERMINATOR, a  Vietnam veteran who has trouble adjusting to civilian life. When one of his buddies is paralysed by a criminal gang, John deals out his own brand of rough justice...and it ain't pretty! Investigating further, he finds links to organised crime, but his vigilante activities draw the attention of not only the police, but also the CIA. As Eastland's one man war of terror escalates, the authorities close in...great stuff!
There is one big screen name here...SAMANTHA EGGAR plays a doctor...well, even big Hollywood stars must pay the rent I suppose, and this must have seemed like Hamlet to her after appearing in the travesty that was DR. DOLITTLE (1967).
This cult classic is a bit hokey in places, but you can easily see where Arnie Schwarzenegger stole his trademark line...even the title is similar to TERMINATOR, which came out four years later.It has to be said though, that the similarities end there.
Ginty reprised his role as John Eastland in a by-the-numbers sequel, Exterminator 2, which is more of the same. More jungle japes from Sneaky Elephant SOON!
Posted by SneakyElephant at 07:23 No comments: Whatever you do, don't mention the CLEANING WOMAN! Starring that wild and crazy guy Steve Martin, this film noir comedy is interspersed with clips from famous Hollywood thrillers of the 40s. Rigby Reardon (Martin) is a private eye on a case. With the help of various big stars such as Humphrey Bogart, James Cagney, Vincent Price and Joan Crawford (and many others!) he attempts to solve the murder of scientist and part time cheese maker John Hay Forrest (George Gaines) and falls in love with Juliet (Rachel Ward) , daughter of the dead man. Rigby gets shot in the arm several times (always in the same hole!) but luckily the gorgeous Juliet is always on hand to suck out the bullet.
The idea for this movie came from a discussion between Martin,screenwriter George Gipe and director Carl Reiner (who also appears as the butler and the nasty Nazi). Martin originally had a screenplay which called for the use of an old film clip, and the project snowballed from there. The finished product uses scenes from 19 old thriller and pulp films, and you may enjoy naming the movies and stars as they appear. This technique of combining old and new footage was even copied by Heineken Lager for a series of adverts starring comedian Griff Rhys Jones...along with John Wayne and the cast of ICE COLD IN ALEX (1958)! Other movies have since copied the idea, notably Woody Allen's ZELIG (1983) and of course FORREST GUMP (1994) which was directed by Robert Zemeckis.
PS to watch this and all other films on VEEHD, open an account on the site...that way you don't need to download the horrible, virus-ridden codec to watch the movies!
More monochrome mayhem from Sneaky Elephant SOON!
Posted by SneakyElephant at 04:25 No comments:

HEY HEY WE'RE THE MONKEES! I looked high and low for this one...it doesn't get seen much on tv. The Monkees were of course the American answer to the Beatles, being manufactured by Don Kirshner, a kind of 60s Simon Cowell. The Monkees tv show was essential viewing for all kids of my generation, and the boys took the charts by storm ( even my hero Jimi Hendrix supported them on their first American tour!) all over the world. This is their feature film, a strange mix of music and comedy. The cast list is AMAZING, featuring Jack Nicholson, Teri Garr, Bob Rafelson (who also directed), Dennis Hopper, Annette Funicello, Victor Mature, Toni Basil and of course Mike Nesmith, Mickey Dolenz, Peter Tork and Davy Jones. After watching this, you will understand why everyone was on drugs back then...it makes no sense without them... More far out films from Sneaky Elephant SOON!
Posted by SneakyElephant at 08:14 No comments: 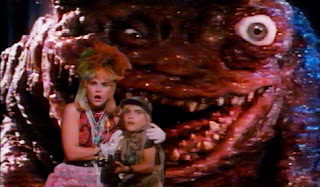 http://www.youtube.com/watch?v=NFsVcflPFl4&feature=related
THIS SKY TV IS AMAZING! Stanley Putterman (Gerrit Graham) has just installed a new, state of the art satellite television receiver...unfortunately it picks up a signal from Pluton, a 'garbage disposal' planet that is in the process of beaming out the most dangerous life form in the Universe, an alien 'pet' that has a taste for human flesh. Guess where the creature ends up? That's right, in the Putterman's living room! The blobby, boggle eyed, two ton extraterrestrial is soon comfortably ensconced in the family home and begins to learn our human ways...while displaying a few nasty habits of his own. I won't give away much more of this uproariously funny movie, suffice it to say that the plot involves heavy metal, wife swapping and a visit from the alien sanitation officer! This encounter goes badly for the unlucky space garbage collector, as you will see. Also stars Mary Woronov, who was a pal of Andy Warhol back in the day. This is my kind of movie...mad as a box of frogs on mescaline! More entertaining effluent from Sneaky Elephant SOON!
Posted by SneakyElephant at 10:40 No comments:

SneakyElephant
My trunk is stuffed with funny films...come and have a look! Read the reviews, then click on the links next to the pictures to WATCH!